Laudato Si’ Project has ambitious goals for 2018 to help this species recover.

Few birds of prey in WI can rival the beauty of the American Kestrel. At roughly the size of a Mourning Dove, it is North America’s smallest falcon. Unfortunately, it has declined nearly 50% over much of its range since the 1960’s.  Reasons for the decline are varied

but include continued clearing of land and felling of the standing dead trees these birds depend on for their nest sites. The American Kestrel is also losing prey sources and nesting cavities to so-called “clean” farming practices, which remove hedgerows, trees, and brush. An additional threat is exposure to pesticides and other pollutants, which can reduce clutch sizes and hatching success. For kestrels in North America, a larger problem with pesticides is that they destroy the insects, spiders, and other prey on which the birds depend.

Laudato Si’ Project is responding to kestrel decline the same way we responded to blue bird decline- the installation of nesting boxes (See past blog post Bluebird Nest Boxes). LSP has already begun the construction and hanging of Kestrel nest boxes. Kestrel’s prefer open habitat where they hunt for rodents, grasshoppers, and other insects. This presents great opportunities for LSP to work with landowner’s in Southeastern Wisconsin installing nest boxes and increasing nest success. Nest boxes can be placed 10-25 feet up on non-utility telephone poles, lone trees or barns. Farm’s, pastures, and preserves managed by our partners provide countless opportunities to help a species in need. These nest boxes also create monitoring and educational opportunities for both students and adults. 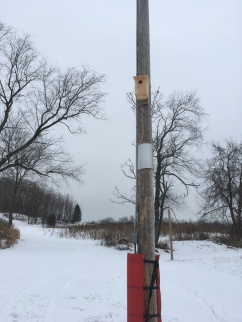 A Nest Box we put up at the HH Ski Club

A nest box we put up at Patnode Pastures

Help us create a house for an American Kestrel

Sponsor an American Kestrel Box for $25. Great gift idea for the nature lover in your life. We’ll send you an Adopt-A-Kestrel Certificate and in the Fall inform you of the number of hatchlings your box made possible. Donate securely online HERE

Cool Kestrel Facts from the Cornell Lab of Ornithology