This weekend was packed with educational fun. Two Parishes and 3 days of Laudato Si’.

Students from St. Leonard’s in Muskego taking part in a Care for Creation activity

On Friday, Laudato Si’ Project taught a Care for Creation program at St. Leonard’s Parish in Muskego, WI. It was the last day of their Vacation Bible School and the gym was packed with the energy of k-4 through 5th grade students. Thanks to their student and adult volunteers for helping make the morning such a wonderful experience. It is great to see young people so eager to learn how to Care for Our Common Home.

It was Sustainability Weekend at St. Gabriel’s Parish in Hubertus, WI. The parish Laudato Si’ Project team had spent months planning this wonderful event. The goal was to engage the parishioners with tools to live more sustainability and learn more about our Catholic call to be stewards of this planet. Partnerships with the adult formation program, St. Gabriel School and the human concerns committee helped make this event possible.

The parish hall was arranged with stations addressing a wide variety of topics.

Our Great Team at the Sustainability Weekend at St. Gabriel Parish 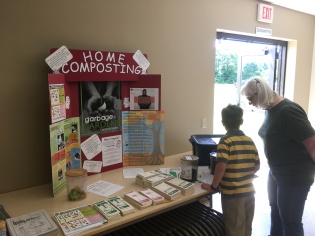 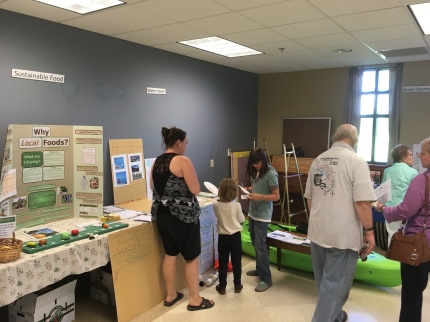 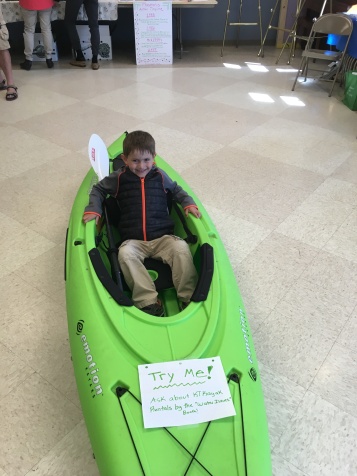 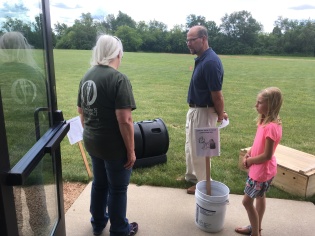 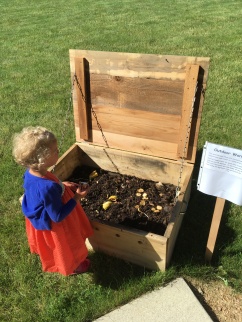 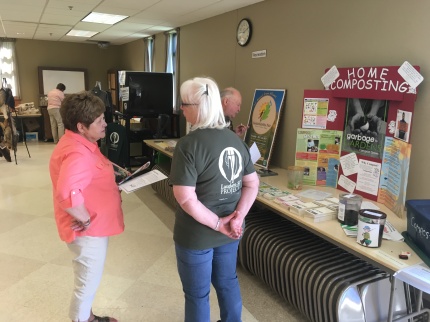 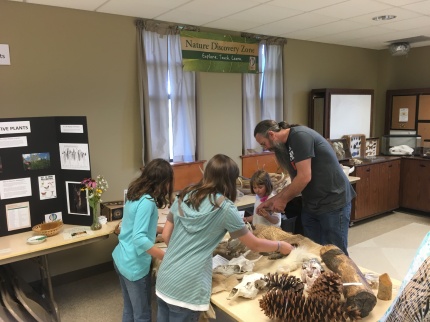 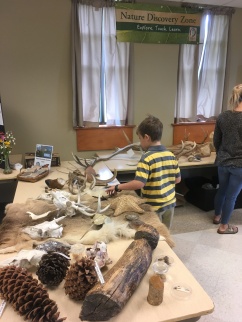 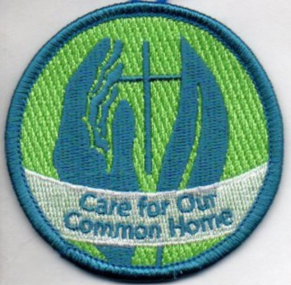 Thanks to the many hands who made this event a success.

A great cultural, spiritual and educational challenge stands before us, and it will demand that we set out on the long path of renewal.  -Pope Francis, Laudato Si’ 202 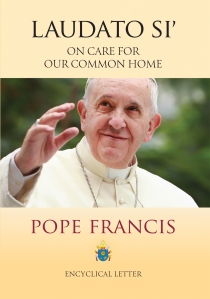 Pope Francis’ encyclical letter, Laudato Si’: On Care for Our Common Home, is 2 years old this weekend. With Father’s Day being celebrated in the United States, it is a great time to remember in prayer our Holy Father, Pope Francis. He has done a wonderful job showing us in word and deed how to live simply in a way that promotes love for God, neighbor, and Our Common Home.

As Laudato Si’ Project continues its work in parishes and schools, we realize that this message is just beginning to take root in the lives of many Catholics. Feel free to use our Resources Page as you learn more about this part of a life of virtue and share it with others. View our list of 5 things you can do each day to Live Laudato Si’—> LiveLS

You may also wish to sign the GCCM’s  worldwide petition to Live Laudato Si.

Below are two projects that LSP has been involved in recently and expresses our love for Our Common Home. 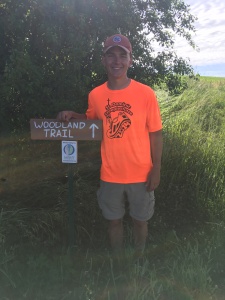 A large crew from Boy Scout Troop 119, friends, and family were busy helping Sam Reinbold with his Eagle Scout Project at the Schoenstatt Retreat Center in Waukesha, WI. Laudato Si Project was excited to have Sam use the woodland restoration for his Eagle Project which included: removing buckthorn, woodchipping a nature path, installing a bench, and hanging trail/tree ID signs. Way to go Sam!!! 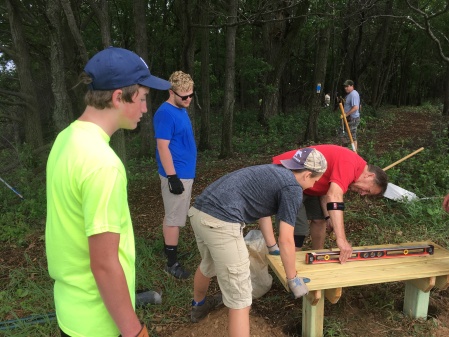 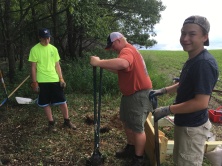 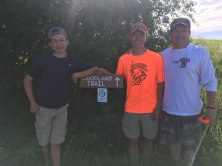 Laudato Si’ Project is proud to sponsor a 2 mile stretch of highway 67 near Dousman, WI. Adopting a highway requires that twice a year, a group of volunteers from your organization removes trash from both sides of the adopted stretch. With our great volunteers, we were able to remove over 4 full garbage bags of trash and 1 bag of recyclables.

Volunteers at our Adopt-a-highway cleanup 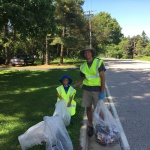 Birds are a type of wildlife that brightens our day around our homes and on our properties. Over 3 million households in the US have bird feeders and 6.2 billion dollars is spent on seed and feeders annually! In fact, bird watching is second only to gardening as the most popular outdoor activity in the US.

Because birds are so common around the house, let me show you a few species that may be calling your home, theirs. Below are 6 species that are currently making nests and raising young either on my house of within 30 feet of it.

This species of flycatcher gets its name from its call which sounds like “Phoebe.” They like to perch on branches and swoop through the air catching insects, thus “flycatchers.” You can identify them by their distinctive tail bobbing when perched on a branch.

An eastern Phoebe found the top of our flood light just too good of a nesting spot to pass up. She is now raising 4 young. 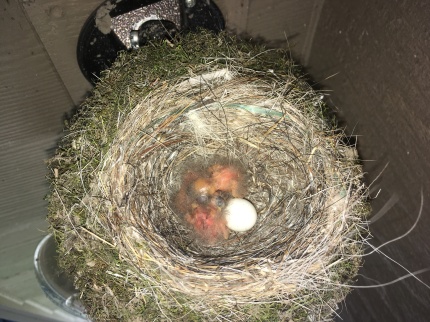 The beauty of an Eastern Bluebird in the yard is hard to beat. These inhabitants of the prairie and oak savannah (which much of southern WI used to be) can be coaxed to nest near you by the placement of a bluebird nest box.

Our resident bluebirds have already fledged their first chicks (top picture) and may do so another 2 times in a good year. See our past post on increasing bluebird populations HERE 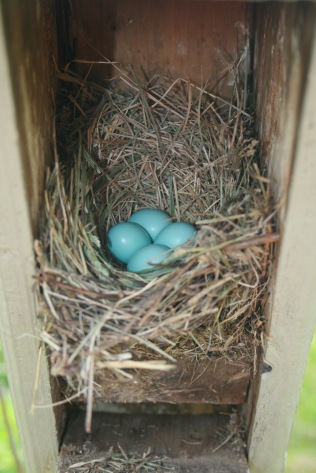 If you want a great aerial insect eater, try to attract tree swallows. Despite their name, they are typically found in open fields and prairies. They are one of seven species found in WI; see barn swallow further below. Like bluebirds, placing a nest box will attract tree swallows like a magnet. Decreasing the amount of mowed lawn you have will help with this. Unlike bluebirds that prefer an acre or more between nesting pairs, tree swallows don’t mind other nesting birds near by.

You can distinguish between a bluebird and tree swallow nest by the presence of feathers. Tree swallows love to line their nests with white feathers. They can get these from a number of different bird species but they love taking white feathers from our chickens. 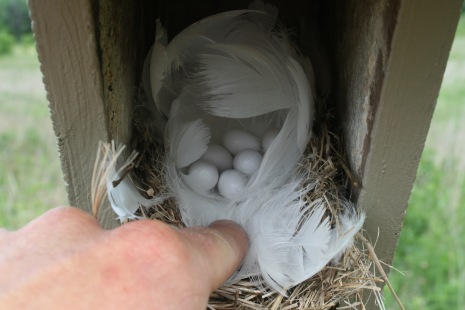 By sheer number, red-winged blackbirds are the most common bird in the United States. Despite being common, it is a great joy to hear their “conk-conk-lereeee” call come early spring. The beautiful males arrive before the females to stake out a territory. They flaunt their wing patches to impress the cryptic colored females, which may number over a dozen in his harem.

If you have an open, wet, weedy patch or wild area near your house, it is likely you have these nesting near you. You will know you are near a nest because the irritated male will be calling as he swoops down near your head. Stiff-stemmed prairie plants make a great nesting site for our resident red-winged blackbirds.

These are another magnificent swallow species named for their affinity for making nests on old barns. We have had these fork-tailed beauties make nests atop our flood lights, but in recent years, they have taken a liking to a few nest platforms I placed under our deck. These nest platforms, which I make out of old plywood, can attract several different species of bird to nest there. 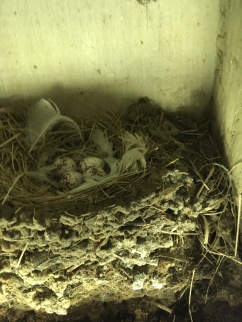 Who can forget Wisconsin’s state bird, the American Robin. We all look for them as signs of spring although many stay here through the winter in flooded woodlands feasting on berries. They are notorious for making nests in precarious places and this year I have two by my house. The first pair is already on their second brood of the year, nesting on top of a pillar under my deck. The second pair preferred the secluded site amongst my wood pile.

The birds of the sky nest by the waters, they sing among the branches. The trees of the Lord are well watered…There the birds make their nests. How many are your works, Lord! In wisdom you made them all; the earth is full of your creatures. –Psalm 104