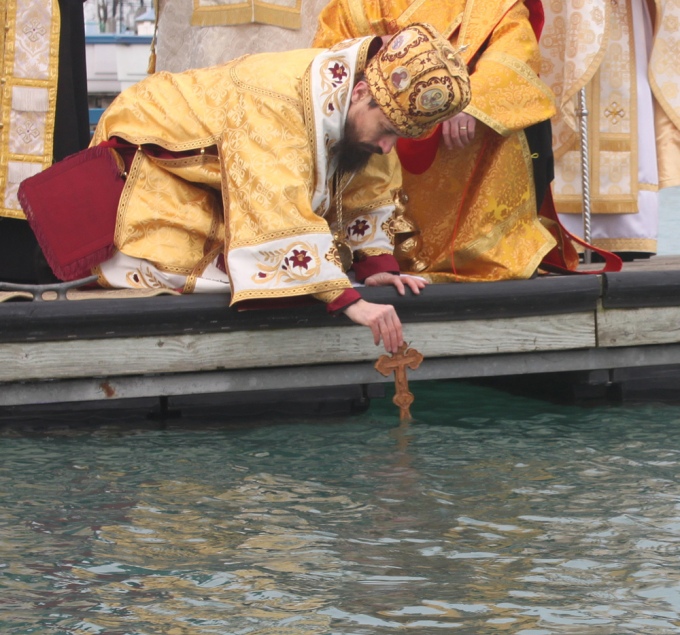 On January 6th, the Eastern Catholic Churches celebrated the Great Feast of Theophany. On this day Catholics in Slavic countries dunked their heads in the newly blessed freezing cold water. In Greek Catholic communities young men dove into rivers and lakes and competed to find a cross which had been thrown in by the chief celebrant. This holy day is one of the original Great Feasts of the Church, dating back to the 2nd century; and in the East it is considered greater in eminence than Christmas. The name Theophany is taken from the Ancient Greek theophaneia, meaning “manifestation of the Godhead”. The feast commemorates Christ’s baptism in the Jordan by John the Baptist. Theophany is a time of spiritual enlightenment, renewal of creation, and most importantly, the sanctification of water, which will then serve as a means of baptism for all Christians.

Looking to the words of The Great Blessing of Water, taken from the rites which surround the feast of Theophany, the emphasis on the renewal of creation becomes apparent:

“Today through the presence of the Lord, the waters of the river Jordan are changed into remedies

Today the whole universe is refreshed with mystical streams

Today paradise as been opened to all, and the Sun of Righteousness has shone upon us

Today, at the hands of Moses, the bitter water is changed into sweetness by the presence of the Lord!”

Christ by his incarnation gave new life and meaning to the whole of the material world. Not only did his very presence sanctify creation, but also elevated it as a means to sanctification. Much of this power which nature possesses to draw humans closer to their creator has become blurred by man’s misuse of it.

How then are we to reconcile these two realities? Firstly, that nature in its nascent state was designed to lead men to Christ. And secondly, that humankind has in many ways disrupted its ability to do just that.

As Christians, our entire life’s goal can be summed up as “an imitation of Christ”. Here then we are brought back to the theme of Theophany. Christ’s presence turned the natural world into “a remedy”. He refreshed the universe, blotted out the sins of mankind, and thus opened the way to paradise. While we Christians cannot literally do that which Christ accomplished by his incarnation, baptism, death, and resurrection, we are called to imitate him by seeking to remedy the ways of man, and in doing so make the path of salvation more visible to others.

This has been the primary goal of the Catholic Ecology Center, that is, to “Connect [people] to Christ and His Creation”. In the past year alone, we have planted dozens of trees, a pollinator garden, and acres of prairie. There are new bluebird houses in every area, beehives, a chicken coop, a greenhouse, and hoop house, each lending to the effort of ethical stewardship. The old troop house is now a nature center. The paths which wind through the woods and interact with the creek and river have crosses and trailside shrines to help elevate the thoughts of each hiker. We have led and hosted dozens of retreats. The grounds also offer an opportunity for visitors to volunteer and give back. Before each addition to the property or new event, we ask ourselves “How will this help us to better accomplish our mission?”.

When our Executive Director, Joe Meyer, began the Laudato Sí project back in 2016, who could have foreseen that the fruits of his labors would manifest in the founding of the Catholic Ecology Center? On March 8th, the CEC will be celebrating its one year anniversary. This passage seems an appropriate meditation for reflection as we herald our second year at the CEC. The Theophanic spirit of restoration and renewal permeates every acre of the property that was once Camp Winding River.

By His baptism, Christ sanctified the waters; by His incarnation, He elevated all of creation; in imitation of Him we must work to preserve and restore that Edenic quality of our natural surroundings which brings mankind close to God. We are just getting started and the path of renewal takes much time and effort, but our hope is that the Catholic Ecology Center will serve as a small piece in realizing this Theophanic vision.